by The Proper Ornaments 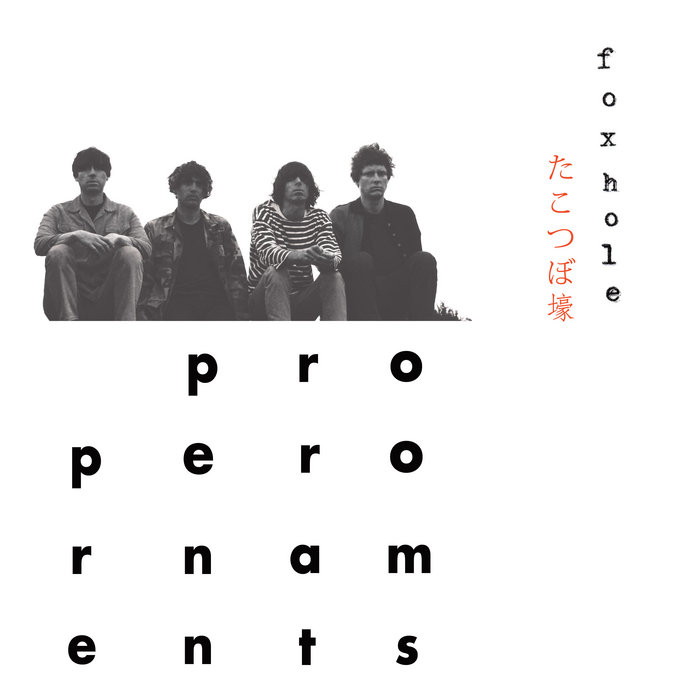 _sftnoise some of the song moods remind me or elliott smith vibe.❤️

Ingwit A great album with a quality hard to pin down. Certain tracks like "Just A Dream" and "The Frozen Stare" remind me of later Elliott Smith, maybe cuts left off Figure 8. Favorite track: Memories.

R CONANT BODINE One of my favorite albums of 2017. Love the warm and breezy psychedelia these chaps practice. Their show at Johnny Brendas in Philadelphia in October was a blast. Cheers mates! Love ya! Favorite track: Cremated (Blown Away).

Camryn Marquez "It was a wonderful day: me and the chaps down at the park, smoking a fag. I miss me mum; she knew how to make the old lad feel proper-- real prompt, you know? All I can say is that I wish you were still here, old gal." Real wonderful album, Gentlemen. This album transcends wonderfully; it's got a certain iridescence to it-- something we all need. Favorite track: Back Pages.

Proper Ornaments is the project of James Hoare (Ultimate Painting, Veronica Falls) and Max Oscarnold (Toy, Pink Flames). The band germinated slowly from their friendship, which began when Max distracted James from shop-keeping, as his then girlfriend attempted to steal shoes. Max was freshly arrived in London from Buenos Aires; helped out by Andrew Loog Oldham as it happens, to escape a drug-lead implosion of a previous band and a family member's plan to have him sectioned.

The chance meeting blossomed into an epicurean riot of luminous highs and cold, dismal crashes that conversely produced music that was very well ordered and faintly angelic. It was so much deeper and more refined, serious, simple and affecting than anything suggested by the bare facts - a guitar band in East London, ten years into the infancy of a millennium that had so far freighted those five words with plenty of horrendous mental associations.

They released a single on San Francisco's Make a Mess and an early E.P. with London's No Pain in Pop in 2011 – then a collection, "Waiting for the Summer" (Lo Recordings) in 2013, which bore the influence of past UK guitar music: The Beatles, Felt, Durutti Column, Television Personalities, Teenage Fanclub – framed by West Coast psychedelia and sunshine pop. Tape recorded and unpretentious in all sorts of ways, it seemed bound to slide around the sides of a snow globe-like mainstream, into that ambivalent fate of being a bands' band: Real Estate, Woods, Crystal Stilts, and Metronomy solicited them for support slots.

Debut LP "Wooden Head" came out in July 2014 and was heard more widely. Perfecting the unique slant of their previous work and polishing it, the album crackled with hints of something majestic behind what could at first be heard, a secret sotto voce world inside. It was as quietly sly and mercurial as it was driving and accessible, and its masterly crafted simplicity drew extensive critical praise. The sweetness of the record, unless you took to a certain track with the lyrics, in fact belied their circumstances. They were living in Whitechapel on slender means and debauched psyches, crawling through the remains of homelessness, unemployment and divorce. Unpredictable, violent acquaintances that were occasionally made band members orbited and crashed. The album was made in a whirlwind of chair-breaking, knife-drawing chaos.

James and Max started out writing the follow-up in January 2015. On "Foxhole" they've sliced away a whole stratum of their sound, removing some distortion and lowering the frequency of plectrum strokes to allow more nuanced, piano-led ideas to emerge. The title isn't a reference to Television's jaunty proto-punk record but seems to be more of a dark, protective interior, a head space sketched out on "Jeremy's Song." While their particularly recognisable production style (a bright, frozen counterpoint to the airless mixes one encounters more often) remains, three things stand out as likely reasons for the shift in mood. By the time they got around to recording again in James" bedroom in Finsbury Park that Summer, the instability around the recording of "Wooden Head" (and the five years before) had slid into a deep and seething acrimony. Second, they both bought pianos. Third, when the band, with Daniel Nellis and Bobby Syme joining on bass and drums went to record at Tin Room in Hackney in June, the pinch wheel on the 8 track machine was broken and somehow no one noticed. All but one recording, "Frozen Stare," was hopelessly warped, so they went and did it all again from scratch back at James".

“We ended up doing the whole thing there as the atmosphere suited the direction of the foxhole and we were more comfortable working on it in our own time,” says James, “We wanted to move in a slightly different direction from "Wooden Head," away from the distorted guitars and into a more peaceful area.”

The mechanical blow out that had wasted weeks of their time and money coincided with a thaw in their friendship, and by the time they were re-recording they were both being treated conspicuously gentler by life.

“That's why the record has a laid back, conversational, not imposing or anxious feel in my opinion,” Max says about their rapprochement, “There's also the technical limitation of doing it on an 8 track which gives the songs a more sparse sound.”

Themes of their previous work have been picked up again and honed. The sense of being overlooked and isolated, inevitable change and drift particularly set in terms of age, predominates. Undercutting the feelings of forward movement are ones of a gnawing permanent stasis and confusion wrought by memory. It's a sombre but also more direct and open effort, from its first number "Back Pages" ("See me on the back page/of last year's modern age") onwards.

If "Always There" was the most melodically fluid but dimly lit point of the first record, there are another half album of songs here at least that are as strikingly gorgeous and unsettling. "Memories," "Just a Dream," "Frozen Stare" and "When We Were Young" are in this mould, as is the icy, slightly devastated goodbye that closes the record "The Devils," filled out with piano reminiscent of Big Star's "Third" or Lou Reed's "Berlin" and cracked double bass. What was in evidence in two of their earliest songs - "You Still" and "Are You Going Blind?" – an understated, poetic play of moral sensitivity against a callous distance, of warmth and hostility, has reached its most sustained expression yet and gives their pop moments of a haunted love song quality along the lines of Del Shannon, Lesley Gore or Roy Orbison.

"Bridge by a Tunnel" and "When You Wake," on the other hand, share in the breezily abstracted character of 2014 single "Magazine," the later laying a sardonic (non)apology - "I know you know, things could've been different/but they'e not" over careful daubs of slide guitar. "Cremated" is also guitar-lead, and reaches an early apogee of morbid oblivion baiting, while "1969" is a really perfectly recorded grand sweep of sound that recalls Serge Gainsbourg and "Harvest"-era Neil Young.

Proper Ornaments hold the attraction of seeming to not try very hard at all and achieve something outstanding nonetheless. Quite apart from our attachment to laziness and chance which make this seductive, textures of dappled drums, softened-out guitars and vocal harmonies that slide along as effortlessly as this, any evidence of conscious construction spirited away, are in themselves totally ecstatic to listen to.

Bandcamp Daily  your guide to the world of Bandcamp